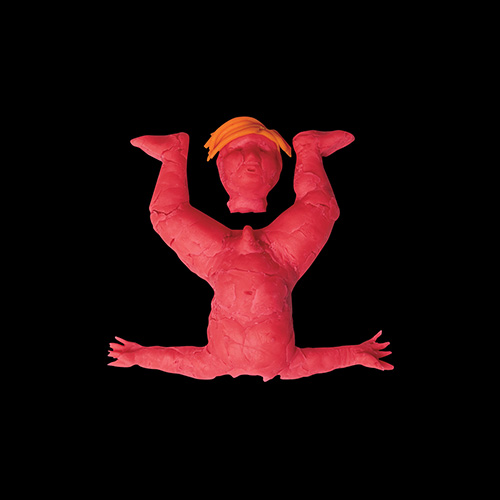 Swedish artist Martin Bladh makes his Kiddiepunk debut with this searing experimental novella in the form of an evil children’s book which explores the darkest corners of a child’s fantasy world.

Doubling as an exploration of satanic ritual abuse and the different forms of therapy used on children to “prove” this abuse, “The Hurtin’ Club” is the culmination of Bladh’s personal investigations into the satanic panic phenomenon that spread through the Western world during the ‘80s and early ‘90s. 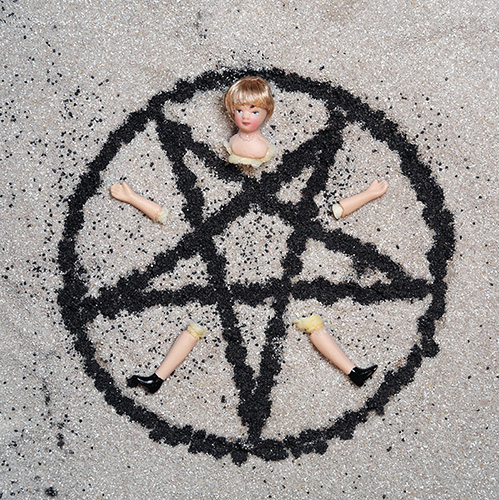 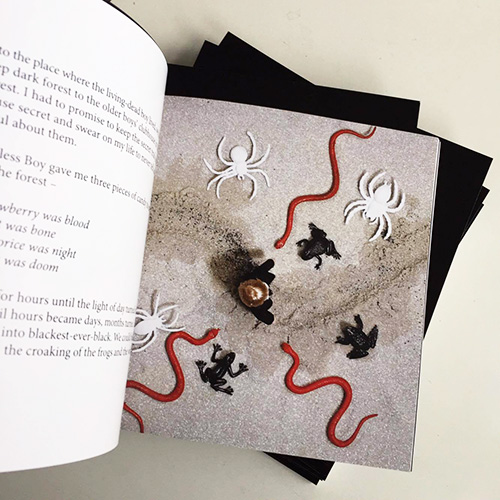 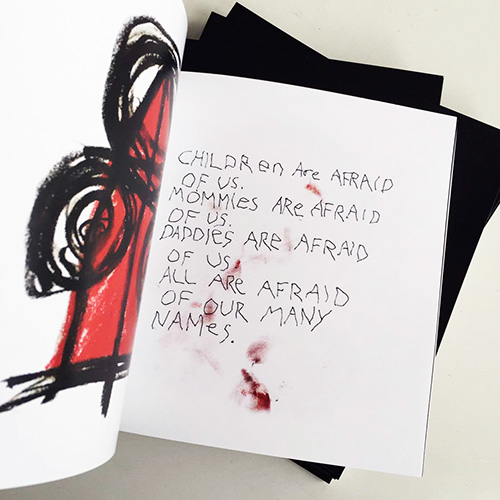 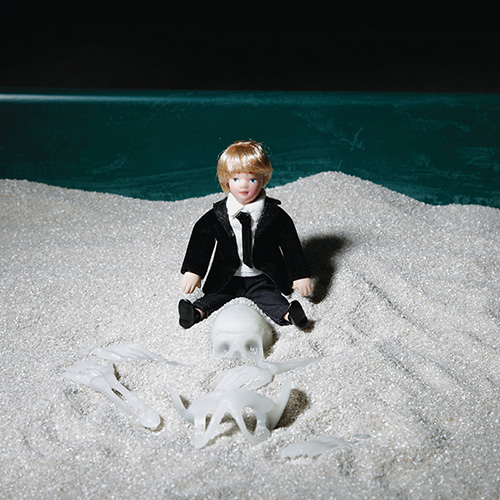 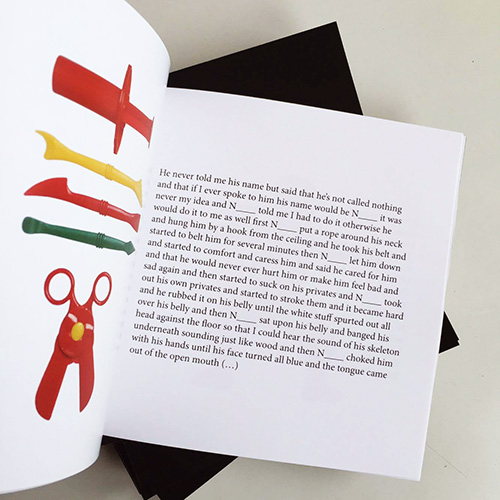 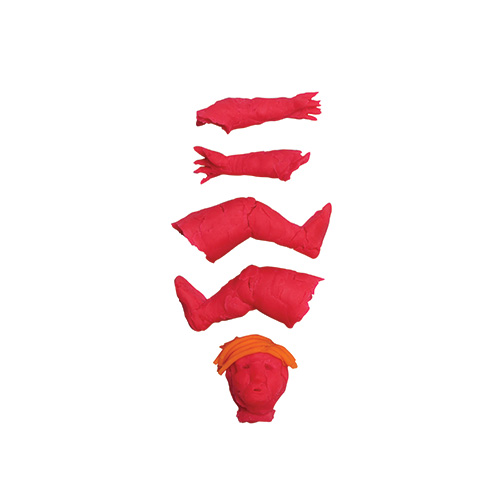 THOMAS MOORE: “The Hurtin’ Club” feels like something that has come from a certain amount of research. Can you talk about where the book and your interest in the subject matter came from, if in fact there are two different starting points?

MARTIN BLADH: It all started with me researching the darker aspects of fairy tales. I was interested in the amount of violence and camouflaged sexual themes in the Grimm Brothers’ and Charles Perrault’s work; the amount of cannibalism, mutilation and incest within tales such as “Bluebeard”, “The Juniper Tree”, “The Three Army Surgeons”, “The Girl Without Hands”, “Hansel and Gretel" and “Hop-o’-My-Thumb”. I also went through modern children’s books with darker themes, some of them written to comfort kids who came from broken homes and dysfunctional families, and was amazed when I came across a book called “Don’t Make Me Go Back, Mommy” written for survivors of satanic ritual abuse. I remember stories circulating in the media during the early 90s, I was a black metal kid at that time. Fundamental Christian groups, militant feminists and opportunistic journalists claimed that hidden satanic networks were operating everywhere and paying tribute to the devil by raping, sacrificing and eating babies. It was a repetition of the “Malleus Maleficarum", the renaissance witch hunts, giving rise to new myths of horror. Several child psychiatrists stepped forward and claimed that the ‘survivor’ children experiences within the satanic cults were so traumatic, that their egos split into different personalities, and the repressed memories could only be revisited through therapy. I read everything I could find on the subject and a couple of years ago I came up with the idea of making my own fairy tale based upon the material.

TM: I’m interested in your approach to the subject matter. Do you see yourself coming from a personal investigation into the effects of Satanic Child Abuse or more from a scientific approach to the various forms of therapy that are used to look into the field? Not that it has to be that kind of binary approach, but I am curious about your mindset when looking into this stuff.

MB: I wanted to mix a psychological, scientific method with the occult and phantastic. What I found most interesting was the actual stories, the case studies themselves, but I also needed the fairy tale context to make it work. My book is not a criticism of psychiatry or an attack on right wing Christians or moral panic. It doesn’t matter whether these stories are ‘true’ (which they are obviously not), they still make great reading. I collected and compared many case studies from around the Western World and the similarities between them were stunning. The ‘victims’ repeat the same stories again and again - how they’re being drugged before taking part in rituals, how they are forced to witness babies, children and grownups being sacrificially slaughtered, how they’re being forced to take part in these killings and to consume the flesh of the victims, how they’re submitted or being the perpetrators of sexual torture, how they’ve been watching or took part in summoning the devil, how they had demons or foreign objects magically operated into their bodies, how dead sacrificial victims are being resurrected and killed again, and how they witnessed or took part in the mass cremation of corpses. The list goes on and on… It’s just too good (or too horrible, you decide) to be true.

TM: Do you have any personal opinions regarding different forms of therapy that are used in relation to kids?

MB: What is certain is that several of the play therapists which helped to create the satanic panic, provided their subjects with a certain selection of toys to play with - often related to death, fear and disgust - like skeletons, creepy crawlies, monsters and slime, to suggest specific scenarios. Then of course we have the whole issue with anatomically correct dolls. I mean if you give a child a doll with anatomically correct genitals he will of course pay more attention to that curious detail. Leading questions and simpleminded Freudian symbolism runs through most of these sessions. Like the great man once said: “sometimes a cigar is just a cigar.” Child’s play is often violent and even transgressive in nature. I have fond memories of mutilating action figures, setting them on fire to watch them melt, as well as blowing off their body parts with fire crackers.

TM: The book makes me think about memory, and how different memories are reconstructed, and how it is painfully impossible to really remember something. Part of someone remembering something is an attempt to piece together mental interpretations or versions of physical experiences. I’d be interested to hear how you think memory is represented in "The Hurtin’ Club" and any whether you approached the work with memory as a theme.

MB: After spending hours and hours being interrogated I’m sure that many kids believed these things actually happened to them. But there’s sometimes a confusion whether the ‘experience’ was traumatic or not. In these cases the children’s memories are often experienced as pictures from a scary book. I believe that innocent games like playing doctor, or dissecting dolls are taken too literally as evidence, and that the children get confused by how seriously the grownups react to their stories. The trauma seems to be a bigger issue for the adult victims who recollects their ‘repressed’ childhood memories because they have a better understanding of the stigma involved. Then of course we must remember that two of the most notorious cases of ritualistic satanic abuse - as represented in the books “Michelle Remembers” and “Satan’s Underground” - are based on deliberate lies. “The Hurtin’ Club” is constructed as a polyphony of memory recollections from a variety of child personas.

TM: How do you see the four distinct sections of the book operating in relationship to each other?

MB: I wanted each section to be exceedingly different from the other. I won't give away too much, but each of them deals with a specific therapy method, which of course is obvious when you look at the visuals. These sections are components in a bigger sadomasochistic construction where several interests are at play.

TM: Looking back now at the finished piece, have you drawn any new conclusions from writing the book?

MB: Well, I understood that I really enjoy to work with fiction. It felt like a relief. I used to believe that I was cutting myself out of the work if I didn’t stick to my usual autobiographical wanderings. Instead, “The Hurtin’ Club” helped me to dig deeper into new territories and bring up images I hadn’t come across before.