"The Night is an Empire"
Poems by Thomas Moore 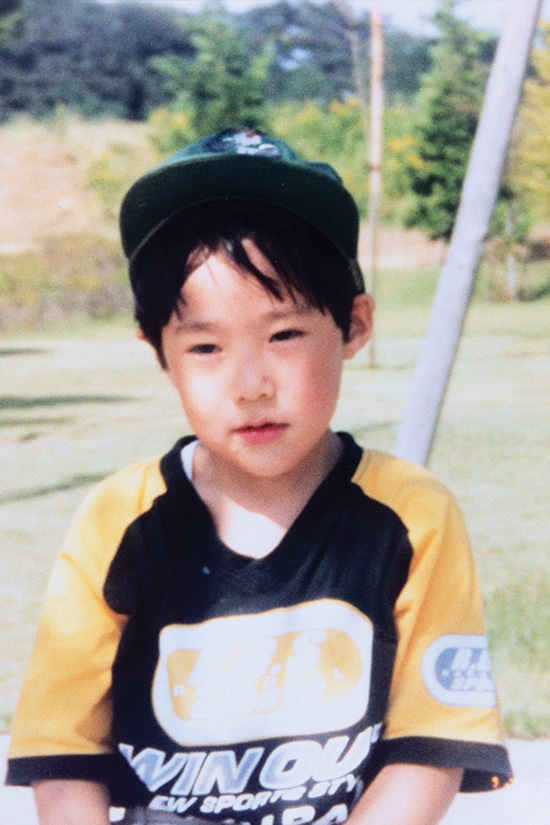 In Thomas Moore's new book of poems, characters and voices swap and blur amid constantly rotating scenes of paranoia, fear and confusion. The isolated narrators that creep amongst the broken lines of 'The Night Is An Empire' lose track of themselves in the precise vagueness of language and the cruel incapacity of words. The purposeful fog that spreads makes the guilty indistinguishable and the guiltless lost. 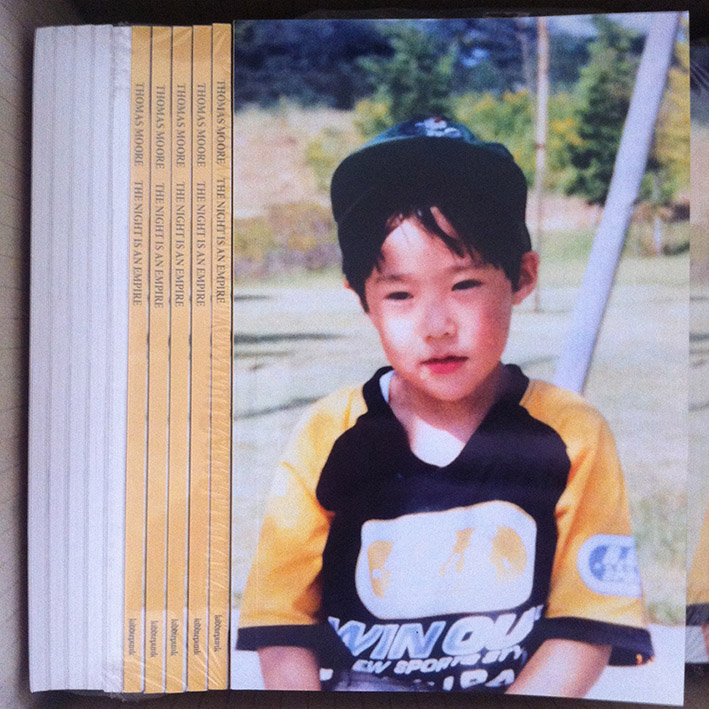 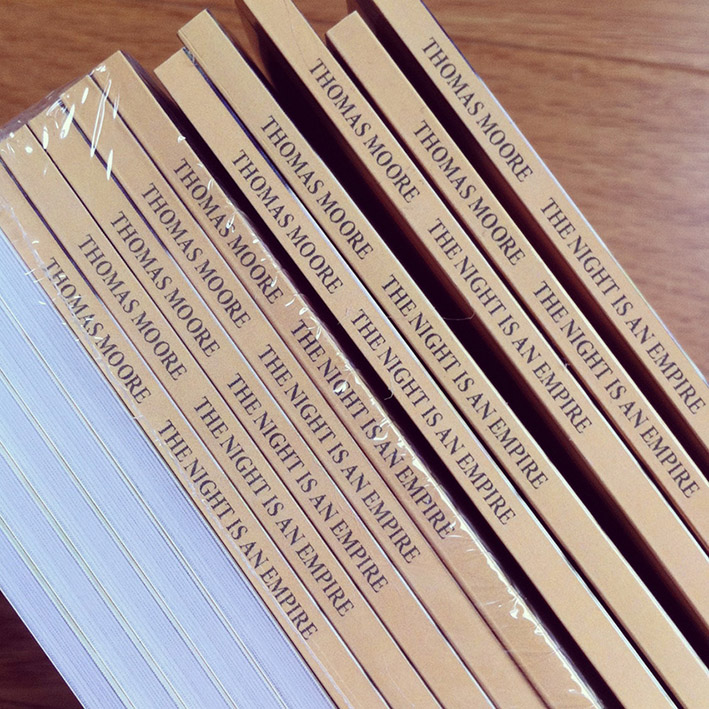 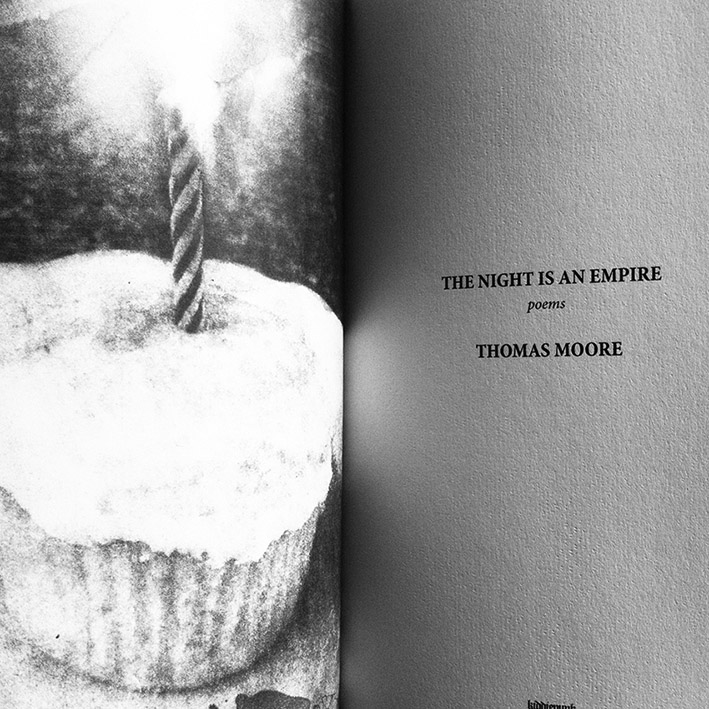 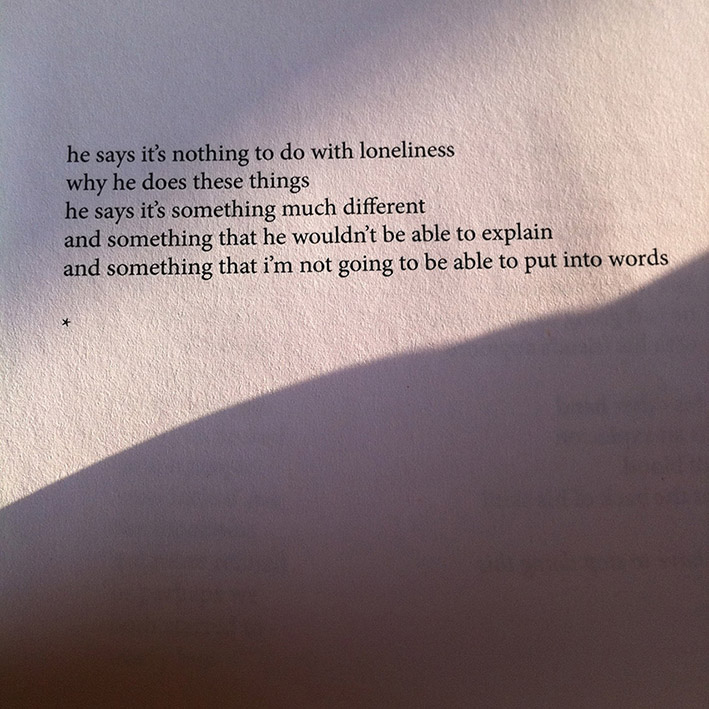 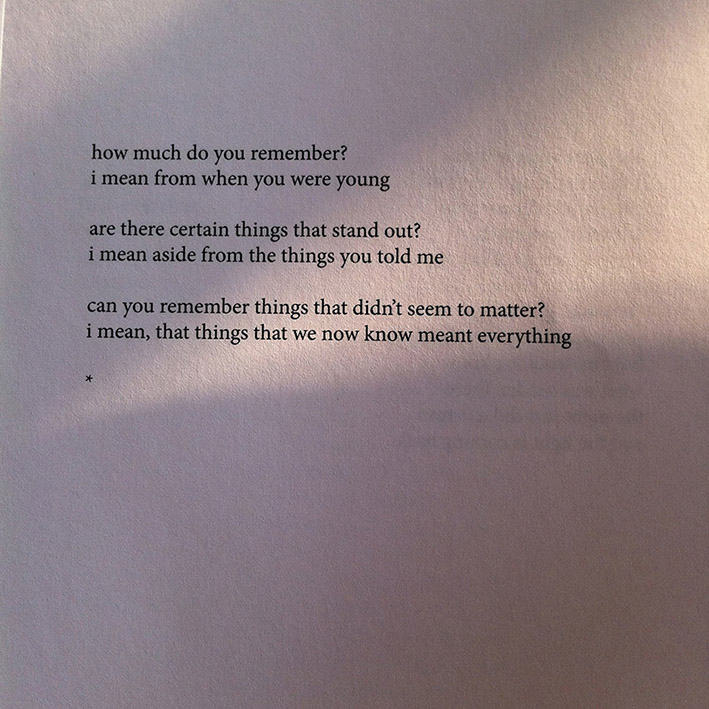 An extract from
"THE HEAVY FUCKING SKY: A CONVERSATION WITH THOMAS MOORE"
by Mark Gluth

I’ve been a fan of Thomas Moore’s work since I read his poetry collection 'Hospital'. Having said that, I was ill-prepared for how blown away I would be by his stunning new collection of poems, 'The Night Is An Empire'. The thing is a tour de force. The pieces are shaped like emotional wrecks, like black forests and abandoned factories. They’re shaped like punches in the face. I found myself stunned by how Moore demonstrates shifting currents of desire, remorse, self-hatred, and yearning intersecting in between lines of text that themselves fail to bear the burden of the secrets that the characters demand that they keep. In the world that Moore created, memories are ghosts and absence is just a type of wavering presence. 'The Night Is An Empire' overwhelmed me in all the myriad ways it, itself, is overwhelmed.

FANZINE: This book is riddled with language referring to language failing. I see this strident inarticulateness as a strategy for the voice(s) in the text(s) to be as articulate as possible, to be as articulate as their circumstance (external and internal, mental and physical) allow. I guess I mean I see it as a sort of show of strength in the face of all the disparate adversity they are presented with. Was this something you intended?

THOMAS MOORE: The failures and limitations of language are a huge thing for me and something that I’ve tried to address or take apart in a lot of stuff I’ve written. I mean, I always think of myself as a very inarticulate person, especially when I speak, so it’s something that’s there all of the time. With this book it’s definitely one of the main things that I was trying to work with. I think there are some really interesting things you can unpick from someone’s attempt or non-attempt to articulate something. I like what you said about it being a way of finding strength; I was thinking of it is as a way of managing to find something beautiful amid confusion but I think we’re talking about the same thing.

FZN: Yeah, we totally are. I also love you how capture this great conversational slanginess in a way that seems super realistic, but you get it to conform to the overriding needs of the text. I mean, both the way it’s edited to display on the page but also the way you allow the innocuous to bear the burden of so much meaning. I’m curious, how do you go about achieving these effects?

TM: A lot of it is intuitive––I played around with the pieces a lot until they felt aligned with the emotions that I was trying to investigate. Certain lines were worked over again and again often simplified as much as I could, too. I’m not interested in writing that is there to serve the ego of the writer, or when a writer uses language to show off or intimidate. I think that there’s meaning and complexity within the most simple interactions or phrases; for me it’s almost more to do with the context, more than just the words. Most of the work was done fiddling around with the overall tone of the poems, so it felt like one large piece as opposed to individual poems.

FZN: Desire in the book is a (to me) super authentic feeling jumble of sexual attraction, the need for connection, and even in a more general way, a want for there to be connections where none seem to exist or even seem possible. The characters seem to idealize the world even though they realize this idealization is fake. All this is also tied together with the often explicitly stated desire to hold on to whatever present/recent past. So, your book seems overridden with romance in a sense. Does that ring true for you?

TM: Yeah, definitely. Maybe I think of it more as a longing for something rather than a traditional romanticism. But the longing that that characters talk about is blurred, very purposely. It isn’t nostalgic or anything like that. I’m fascinated by conflicting desires, things that are problematic because of how vague they seem and vice versa.


Read the full interview over at Fanzine →

All Of My Fears Are Shared With Strangers